Have you ever watched MasterChef?

My wife is a big fan, so I’ve seen dozens of episodes.

Years ago, I was confused because I watched these cooks present their meals to the world’s top chefs, and their meals were very simple.

Did they taste better because of better technique when cooking? (For sure.)

But one reason their dishes were top-tier is because of ingredient quality.

In one episode, they had to fillet and cook wild Alaskan King Salmon.

Now, I’ve never had wild Alaskan King Salmon. But I have had wild pacific sockeye salmon, and I can tell you that it tastes 10x better than farmed Atlantic salmon.

It doesn’t matter what you do to that farmed salmon. You could add tons of oils, sugar, spices and pan-fry it with Michelin-star technique. It will never taste as simply cooked wild salmon.

Check out this 2009 study on vitamin D content in fish. 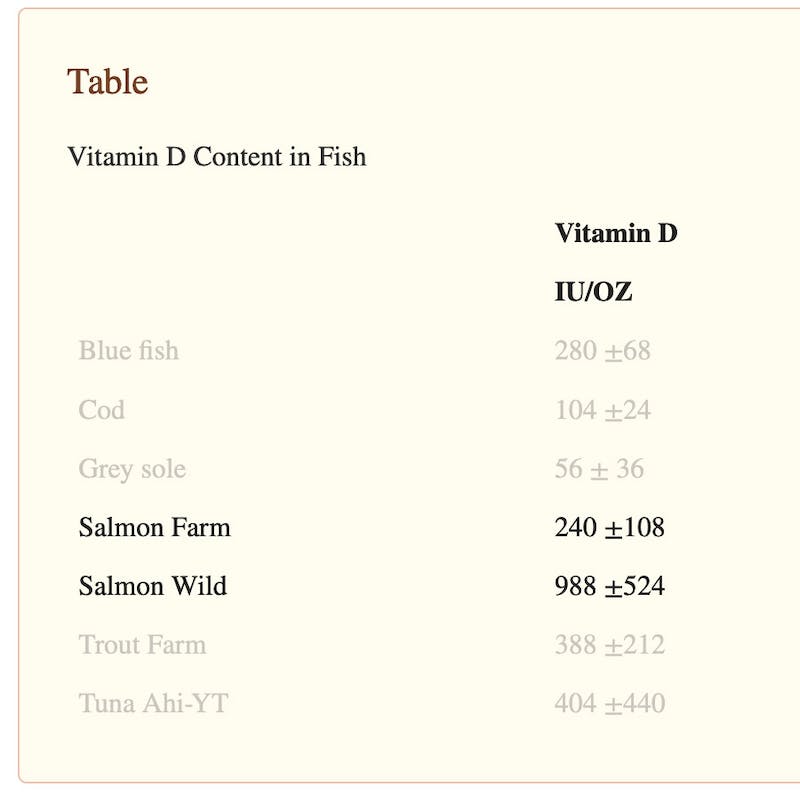 And we haven’t even talked about the colour yet. Let me quote from a paper:

“Astaxanthin is the main carotenoid found in the flesh of wild Atlantic salmon and Pacific salmon.

Wild salmon acquire their pink-red colour from the astaxanthin of their prey.

To obtain a flesh colour similar to that of wild salmon, [farmed] salmon are fed fish feed fortified with astaxanthin amongst other things. … (for example, Carophyll Pink®). These synthetic forms are commonly used in conventional fish farms.”

So even the colour of farmed salmon isn’t real. What you’re seeing is a synthetic supplement.

Now when I look at the store prices around me, it looks like wild sockeye salmon is around 50% more expensive than farmed.

But it has 400% more vitamin D (and I’m assuming other nutrients as well), nature’s balance of fats, etc. So in my head, it’s actually *cheaper* than farmed salmon. If you start considering the fact that farmed salmon is polluting the waters with pesticides and antibiotics and the fact that farming has led to the decrease of wild fish (and many other downsides, Stanford)—it’s a steal.

On a strict calorie basis, the farmed salmon is a lot cheaper. Calories will prevent starvation (keep you alive) and fill you up a lot more per dollar.

And that is the crux of the problem we find ourselves in.

Researchers have dubbed it “high-calorie malnutrition.”

It’s when someone is getting too many calories while simultaneously becoming more and more malnourished because they aren’t getting enough vitamins and minerals.

So most people find themselves in a catch-22.

Or you can opt out with option 3… don’t eat less/more of the same food that caused the issue. Instead, eat differently.

And to bring this back to our topic—how to make healthy food taste better—just buy better quality food, which has more nutrients and tastes way better naturally.

Food Swaps That Are Healthy That Taste Better

Now that we’ve solved the problem of taste, we have a new problem.

Real, nutritious food is more expensive in terms of money (in the short term.)

On this blog, I covered research that unhealthy people make less money than rich people due to taking more time off work, paying for expensive procedures, paying for medication, and sometimes even having a shorter career due to the inability to work.

And I am sympathetic to those who are on a strict budget (there are still ways to eat healthy while being prudent.)

But when I look around, I see people paying thousands for:

For some reason, I don’t think really think the cost is the main problem for most people.

Is it worth it to give up something nice that you already enjoy, to spend more on something boring like groceries?

Let’s reframe it—is it worth giving up something “nice to have” to finally feel good, lean out, muscle up, and get your fitness back—while eating delicious meals? Might be worth an experiment?