How do you stop a nasally voice? I don’t have a guaranteed action plan as of yet, but I can give you some hints of truth that I’ve come across.

When I was a teenager, I was in a crummy local metal band, but it set off my interest in the voice. I used to think things like the tone of your voice was all genetics.

Why does a warm, deeper voice sound better?

Over the past ten years of building a business helping people get the body they want, I’ve constantly found more and more evidence that aesthetics and attractiveness are often just signals of health being broadcasted.

I believe a deep, warm voice is another sign of health, and that’s why it sounds better. And on the flipside, I believe a nasally voice is a sign of some sort of health issue.

After gaining 40 pounds of lean mass, I now stand tall, but I still have a bit of hunchback work (thoracic rounding). I’m still sorting through due to years sitting rounded over a computer. These bone adaptations take a lot of focus and work to restore (and I do spend a lot of time on the computer a lot of reading, writing, etc.)

But even though I’m standing much taller than I used to be, my voice patterns are still engrained.

Shane coined this classic position as “ecto-belly,” where your hips tilt forward, your belly sticks out, and your shoulders round forward, and your neck compensates by creating forward head. 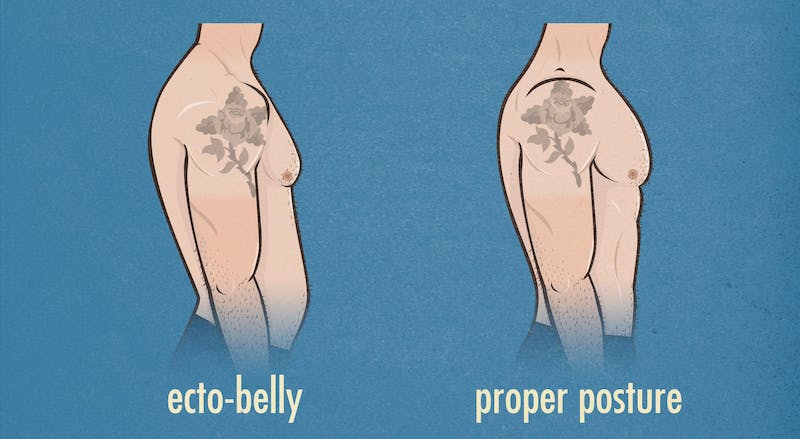 Essentially, you adapted to sitting all day. And this turns off certain muscles, and eventually, your ribs don’t come down and start to flair.

This makes it difficult to get a full breath. It affects our health in a lot of ways, such as:

And when it comes to the voice, without a full breath, you won’t get the pressure needed to give your voice the foundation the chest resonator needs for a full sound.

Instead, most of the sound is characterized by your nasal passages instead of your chest/diaphragm doing the work. And that sounds… well, nasally.

A lot of guys and gals we’ve worked with usually want to become strong and lean. Once we help them put out that fire, a lot of them will start asking us about fixing up their slumpy posture for good.

It all starts with a willingness to learn, paying attention, and then slowly restoring the natural way we ought to breathe.

If you want a video to experiment with, here’s Marco coaching the 90/90 hip lift to turn on the diaphragm and get the ribs down.

To be clear, I’m still learning more about this stuff. I have been following a horribly dated program on improving voice tone, that I’ve been really happy with so far. It looks straight out of the eighties (it might actually be), but so far I’ve yet to come across another program like it.

If you think you have a nasally voice, a simple test is: 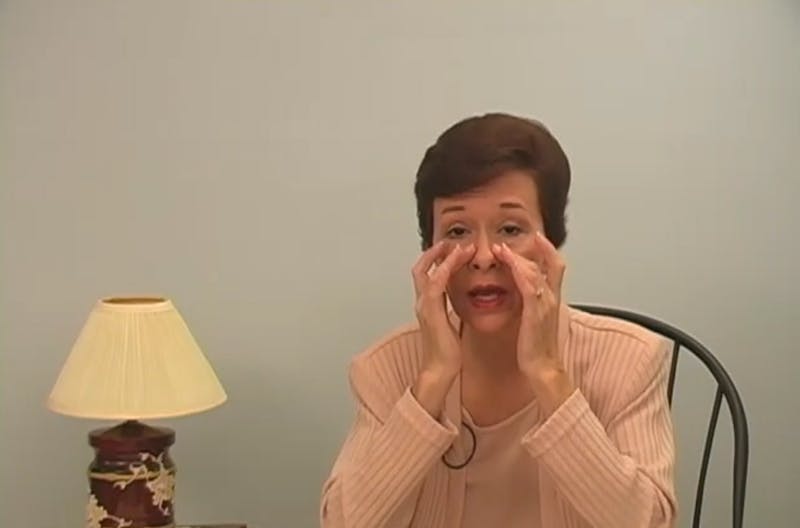 She’s known as the voice lady, and she had a neat test to find your real voice potential if you are a bit nasally. Try saying “Ho, Ho, Ho” like you’re Santa. That’s at your bottom of your range and not so far off from where you could be. (Your natural voice sits a little bit higher than your lowest potential sound.)’

Since late last year I’ve been practicing mewing. Mewing is the process of repositioning your tongue back into it’s proper place at the roof of your mouth, and not loosely sitting behind the teeth. I had my crooked teeth corrected by removing two teeth and using braces.

Saying goodbye to my night retainer and switching to mewing was a bit of a scary decision, but it seems to have worked out for me. Not only is my smile wider, my teeth no longer ache during the day, and I’ve noticed a new benefit.

My voice is less nasally now that I’ve been mewing. (Note: this is risky, you could undue your “straight” teeth if you’ve had braces.)

I have no idea why this would be, but I read in Weston Price’s book Nutrition and Physical Degradation, that in the remote tribes he visited with perfect dental health and wide smiles, they’d all be excellent singers with deep booming voices.

Maybe a mixture of white rice, white flour, and canned goods has caused a collapse of the face and has caused a nasally voice…

My next idea is to pay attention to archetypes to see if there are any patterns:

I’ve started to notice that exceptional singers normally have a strong jawline and a space between their teeth.

Anyways, curious to know what you think of this.

Do you have a nasally voice?

Do you have ecto-belly—also known as anterior pelvic tilt? Or did you have crooked teeth?

You can reply below in the comments, and I’ll get back to you.